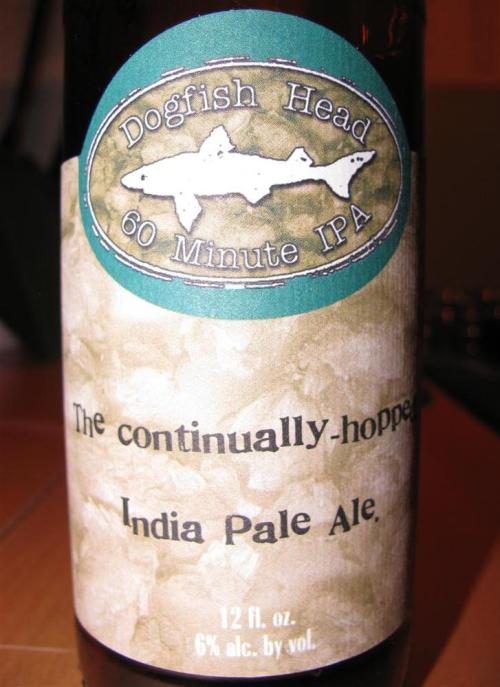 Those of you into craft beer will know that America is now undoubtedly the forerunner, quite ironic when you think that a few years back all they had was BMC (Budweiser / Millers / Coors). All that has changed over the last decade or two, and now America boasts hundreds of craft breweries, some of them making truly excellent beers. One of the most well-known of these modern-day craft breweries is Dogfish Head. If you’re familiar with the Discovery channel’s Brew Masters show, then you will already know of them.

Opened in 1995 by head brewer Sam Calagione, Dogfish Head is now one of the USA’s premier craft breweries, known for the most part for over-the-top hoppy American-style pale ales, IPAs and Double IPAs. I must admit I was as suprised as anything when I found their beer at my secret beer shop in London on my last visit, this being the first I’d heard of them being available this side of the Atlantic.

I bought two bottles of their 60-Minute IPA, so called because it is continually hopped for 60 minutes. That is, additions of hops are added at regular intervals for the duration of their 60 minute boil, according to their website more than 60 times! The “6” theme is continued in its alcohol content (6%) and bitterness level (60IBU).

For those of you not familiar with the IBU system (International Bitterness Units), I can tell you that 60 IBUs is very bitter indeed. If you consider that the iconic Sierra Nevada Pale Ale is about 40-odd, that should put things into perspective (assuming, of course, that you’ve had the superb SNPA before). However, in comparison to SNPA which is as dry as a bone, this beer has considerable residual sweetness which balances the bitterness very well.

Something else that Dogfish 60 shares with SNPA is that it is bottle-conditioned. That is, there is a second fermentation that takes place after bottling which provides natural carbonation. Apart from being romantically old-school, the big upside of this is that any oxygen introduced at bottling is metabolised by the living yeast in the bottle instead of hanging around to stale the beer. This greatly improves the shelf-life of the bottle – especially important for a hoppy beer like this.

The beer is, unsurprisingly, a hop-bomb. It has a wonderful aromatic, tropical fruit smell with a hint of pine resin that almost overwhelms when it’s poured, but in a good way. I took great care not to over-chill the bottle, and also to pour it carefully so as not to disturb the thin layer of yeast sediment, so the beer poured beautifully clear with a light white head which died down leaving a bit of thin lace fairly quickly.

The flavour, as you’d expect, is all about the hops. Hugely resinous, piney and citrusey but also very smooth from substantial caramelly malt sweetness, almost to the point of being cloying but falling just short, with a solid bitterness backing it all up. There is a touch of warmth from the alcohol too, and a fairly full-bodied mouthfeel. This beer is a fraction of a hair away from being syrupey, but manages to just be dry enough to be drinkable.

All in all, this is a very good beer. The impression I got from it is that the brewers have pushed the envelope in terms of the alcohol, sugar and hop content as far as they could while still maintaining some semblance of drinkability . The result is that this is an incredibly full-flavoured beer, one that I really enjoyed but I’m not sure I would want to drink all the time. My secret beer shop also had their 90-minute IPA, so maybe I’ll give that one a try next time.