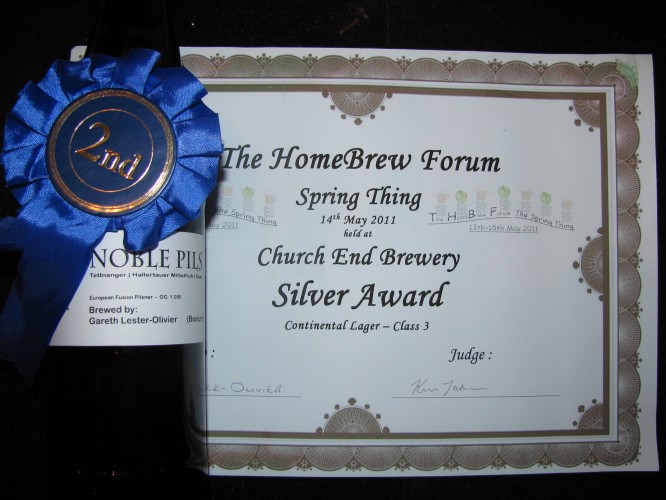 It’s been a while since I posted my brewday and recipe for my Noble Pils. A beer like this tends to be a bit of a long-term project for a few reasons, mainly because it is a lager and as well as taking longer on the day to brew, lagers also take about twice as long as ales to ferment. Add to this the so-called ‘lagering’ (cold storage) process whereby the beer conditions and clarifies at near-freezing temperatures and we’re up to a few months. If this wasn’t bad enough, this was a very hoppy beer and over-hopping takes some time to mellow out (bitterness and hop flavour diminishes with age).

Whilst most of this is unavoidable, the over-hopping was entirely my fault. I am still getting to grips with my new 10 gallon system (up until recently, I’d been brewing half this volume at a time) and its hop utilisation. The result was a beer that was so aggressively hoppy it was in pale ale / IPA territory. The upside of this is that it will mellow in time, leaving a nicer character than if I’d used less hops and had the beer ready earlier, although hop aroma tends to suffer a bit.

As it happens, this beer is now drinking extremely well, for me it’s flavour falls somewhere between that of Victory’s Prima Pils and Budweiser Budvar (the real Czech stuff, not the sex-in-a-boat American version). As of a few days ago, I’m actually onto the second keg and this really highlights how nice it is to be able to produce two full kegs of lager at a time, considering how the beer only really started showing at its best near to the end of the first keg. Ask any homebrewer which pint was the best and he’ll invariably tell you it was “the last one in the keg”.

Anyway, I entered it in The Home Brew Forum‘s Spring Thing Competition last month under the Continental Lager category, unfortunately a few crucial weeks before it really hit its peak but what can you do. All the same, it managed to snatch second place, something I’m quite stoked about. I lost out on first place to the infamous Aleman, renowned in homebrewing circles as a master homebrewer and someone who’s given me advice in the past, so I really can’t feel too hard done-by. My only regret is that I’d made it to the competition to receive my award in person and to taste the other winning entries as it looked to be a brilliant event and it’s nice as a brewer to meet up with other people who actually share this fairly obscure interest.

In fact, I relied on my brewing mate Pete the Swazi (decorated homebrewer, South(ern) African and all-round top bloke) to bring home my score sheets and rosette. The comments on my scoresheet echoed what I thought myself, ie that the hop character was a little aggressive and that the beer could have used a tad more carbonation (my CO2 bottle ran out a few days before bottling and I wasn’t able to adjust it back up in time).

I actually entered two other beers at the same time – an APA and an English IPA. The APA wasn’t in the best condition when I sent it off but that was beyond my control and I’d paid for the entry already, so I wasn’t too surprised when it failed to win anything. My IPA, however, managed a very respectable 49 points out of 60, but competition in that category must have been really stiff as this wasn’t even enough for third place!