You know you’re in Belgium when… 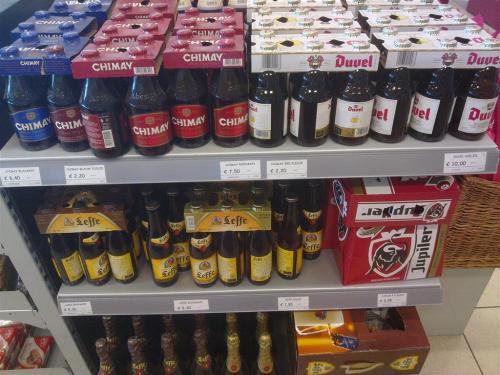 I consider myself extremely lucky to be in the somewhat envious position of having an old friend who actually lives in Holland, so I was able to pop over to Den Haag (The Hague) for a few days to visit him and enjoy the local fare whilst there. Even better, my other half, K, has a good friend who is currently studying in Leiden, so she was able to visit her old friend whilst I did the same.

If you didn’t know, Leiden and The Hague are only about 15 minutes apart, and are both about one tank of petrol away from Maldon, where we live together in England. That in mind, we decided to take the car and Europe for the long weekend (in the UK, Good Friday and Easter Monday are public / bank holidays).

We took the Channel Tunnel from Folkestone to Calais, rather than the ferry from Harwich to Hoek van Holland as it was just too expensive, so this required us to drive through Belgium (and a little of France) to get there. Being a Belgian citizen myself, I am always happy to visit the old country, there’s something intangibly great about this sleepy little country, even if beer isn’t your raison d’etre like it is for me.

I have a few bits and pieces from the holiday to write up and share, but the first thing I thought might be of interest to those of a beery persuasion was the selection of beers available from a petrol station on the motorway somewhere between Calais and Gent. In my homeland of South Africa, petrol stations don’t generally sell beer at all (this is somewhat ironic, as a large proportion of South African drivers love to drink and drive. Some might go as far as to say it’s the South African national pasttime, with more than 1100 road deaths during December 2010 alone, but I digress), so I always do a bit of a double take whenever I see ice cold lager for sale on a busy motorway.

In the UK, you’re usually presented with a choice of Stella, Fosters, Kronenbourg, Carlsberg and maybe Newcastle Brown if you’re lucky. But this is Belgium, the spiritual home of good beer, and it shows. Even in this plain little shell garage, I counted about 9 different Belgian ales (two of them Trappist!) as well as a selection of different lagers from Belgium and the rest of the world. I guess by Belgian standards, these are probably the usual suspects, much like those on the list I just rattled off are back in the UK. Who has the better deal? You tell me…

2 responses to “You know you’re in Belgium when…”